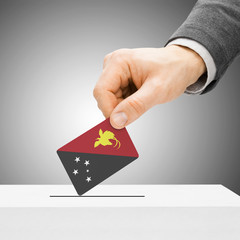 As part of its promise to ease Papua New Guinea’s chronic land shortage the O’Neill government has announced a stunning plan to give away 2,000 free PNG land titles in every province of the country.

2014 was a positive year for potential PNG homeowners with the establishment of the First Home Ownership Loan Scheme (FHOS) to assist people to obtain a home loan at an attractive rate. Whilst the FHOS was a welcome initiative, the requirement that a borrower supply a land title as security for the loan has meant that many ordinary citizens have been unable to secure funding. Thus, as good as the FHOS is, it’s clear it was excluding a major portion of the population, in particular those families who did not own any land and, as a consequence, could not apply for a loan without being able to provide a security asset.

Free PNG Land Titles will be given to ordinary citizens

In 2015 the Government has identified the problem and has come up with a stunning solution that may change many lives and probably improve the economy and wealth of the country. According to the Planning Minister Charles Abel the Papua New Guinea Government will provide 2,000 free PNG land titles to citizens to build affordable houses in each of PNG’s provinces. The programme is aimed at working class people and not the wealthy. The pilot for this ambitious project will start in Port Moresby where Mr Abel says the government has identified land close to Jackson International Airport which the National Airport Corporation has committed to being made available. Following the Port Moresby pilot allocation, the city of Lae will have 2000 titles made available near the Nadzab airport.

The free land title allocation forms one part of a broader scheme where every single one of the 89 districts in the country would receive approximately K1 million to construct 10 houses for the local public servants. Mr. Able said, “We are giving every district K1 million to build public service housing.” The idea is to start the project first by providing housing for public servants. Once this has been completed, the next step will be to extend the project into the private sector. Mr. Abel, who serves as the chairman of the Ministerial Committee on Affordable Land and Housing, emphasized that the purpose of this initiative was to help average working class citizens and Papua New Guinea build homes. Its focus was not to give additional land to well-off individuals who are already homeowners and who can easily apply for a loan.

Prime Minister Peter O’Neill has taken the first steps in getting this program up and running by depositing K200 million into the Bank of South Pacific to support the FHOS. The next step is to distribute the free PNG land titles to the population so that they can provide a security for receiving a loan and eventually build a house. Prime Minister O’Neill realizes that several steps must be followed to get the free PNG land titles into the hands of ordinary people. Once this has happened, ordinary citizens can go to the banks and secure a loan because they have their title as security. The project is expected to provide the citizens of Papua New Guinea the ability to purchase a home for K150,000 and repay the loan over 40 years with a very low rate of interest.

Stay informed about this programme and the first home ownership loan scheme!

To receive news and updates about Free Land Titles initiative and other programmes to help PNG home buyers, CLICK HERE to receive the Hausples.com.pg Newsletter.