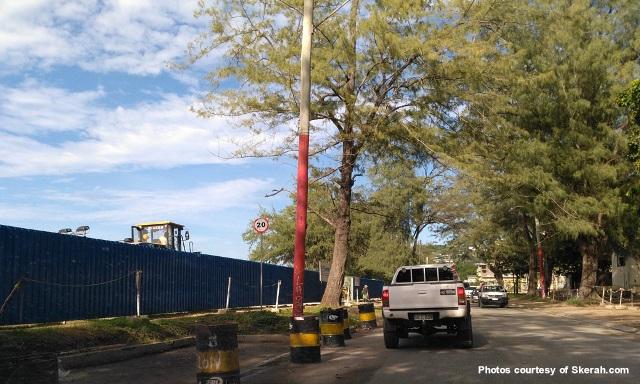 Green or Gold: Painting the Future of Ela Beach

Ela Beach is Port Moresby’s primary public beach. It houses the country’s whitest sands, beautiful waters, and a range of various recreational facilities like beach volleyball and basketball courts, a boardwalk, an amphitheater, and a few kiosks. Or at least that’s what it was. Now it’s playing host to a rather controversial development that foreshadows significant changes in the landscape that has once defined Port Moresby. And whether that change – a proposed four-lane road and a beach extension – is good or bad depends on who you ask.

All that glitters is not gold

The underlying issue is not with the project itself, as many perceive it. The real problem with the construction of the development, at least for most of the city residents, is the fact that the project will involve cutting the old Casuarina trees that have decorated the landmark for decades, trees that have been part of countless family stories passed down from generation to generation. For some of these people, removing them means removing a part of the country’s history.

Many are also already crying foul and asking if the government could have done more research in order to continue construction without having to cut the trees down.

The government was quick to respond to the allegations and have made it clear that they are doing all they can to save as much of the trees as possible. NCD Governor, Powes Parkop said, “We understood that the older trees were part of the Ela beach heritage and are working hard to save those which can be saved.”

He clarifies that the ones being cut down are merely trees that have reached their life expectancy. This will be a difficult dilemma in the future should the dead trees become a threat to public safety.

Parkop stressed, “Our interest is to serve our people as best as possible. Ela Beach is the only major park we have in Port Moresby and we are looking forward to making it bigger, better and more serviceable for our residents.” He also urges the residents to not focus on what will be lost, but instead to focus on what can be gained.

With the loss of the abovementioned facilities, the residents will gain a larger beach area, a new two-way road, and even a new Sea Park not far off into the beach. These will add to the APEC Meeting Hall which is set to become one of the most iconic buildings in PNG. This, the government hopes, will propel the country into the global main stage.

In total, the government will be spending K55 million for the redevelopment of Ela Beach and another K45 for the Sea Park. Both projects are expected to reach completion in 2018, right before the APEC Summit starts.

With both arguments valid and both sides taking the initiative to fight for their own causes, what remains constant and agreeable is the fact that everyone just wants to paint a better future for Ela Beach and PNG as a whole. And while it looks uncertain for now, it will soon be revealed just how much everyone can benefit from the bigger picture. For now, we can just give the artist some recommendations and trust that the final product will be one that everyone can enjoy.