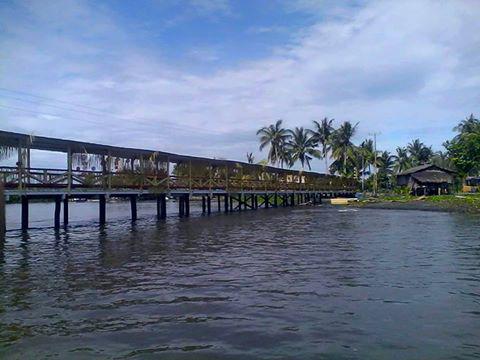 Playing a huge part as a factor affecting growth and as an indicator of it, infrastructure is easily an essential element that affects people’s way of life in Papua New Guinea. It offers accessibility, comfort, convenience, and opportunities. But is the end result of building PNG infrastructure really all fine and dandy?

Land and property prices in Siviri and Kerema may see a sudden change, following the completion and launching of the K-Bay footbridge last September 16, 2016.  The bridge cost K350,000  and was built by the Mesaivo Clan Land Owners. It was funded through the SSG Funds by the Gulf Provincial Technical Services. This project will allow locals to conveniently move from one town proper to another in order to access healthcare, proper education, and markets. Gulf Governor Havila Kavo – who attended the opening – warns though that the Siviri people who had been affected by the unusually high tides should relocate to another area. This bridge may be one of the steps for residents to slowly and easily do that.

The opening of the 100-meter long K-Bay footbridge last Friday was also attended by the Mayor of Kerema Town, Jack Narrie, and Gabriel Ikamu who is the ward councilor of Siviri.

While the construction and completion of the K-Bay footbridge has brought new opportunities for locals and tourists who wish to visit Siviri and Kerema, another PNG infrastructure is causing an alarm – not because of the infrastructure itself, but developments surrounding it. Concerns regarding the Jackson International Airport in Port Moresby is now increasing, particularly because of the houses that have been popping up in and around it.

According to the Civil Aviation Authority, not only is this in breach of existing policies, but it’s also dangerous for people living in these housing developments who can potentially be victims of aircrafts crashing through their property. The CAA also adds that these housing projects have not gotten any sort of approval. Some of these houses have even been built along flight paths and are causing problems as they serve as obstacles for aircrafts trying to leave and land on the airport. Any more of these developments and the runways may be rendered unusable.

Residential and commercial properties are soon to enjoy the taste of hydropower as Papua New Guinea’s Works and Implementation Development Department closed in on investor Korea Southern Power or KOSPO through a signed memorandum of understanding. This is especially significant since only 10 percent of the total population have access to energy.

Through this project, the government aims to increase this figure to 70 percent by the end of 2030.

Expecting to generate around K4.3 billion, construction of roads that connect 9-Mile, Gerehu, and Hanuabada started back in 2012. According to the NCDC deputy city manager of regulatory services, Kenneth Atasoa, this will open up zoned land for businesses and commercial use. In total, there will be around 4,000 allotments that would be available. He explains that this will also open up the land which individuals and developers can utilize for development projects, including residential housing and buildings. He says “The roads have enabled rapid development and there are vast commercial opportunities to be made use of (from which) businesses and residents can benefit.”

Heaps of upcoming and completed infrastructural developments are causing changes in the real estate sector, most especially in the residential and commercial market. But whether the long-term plan for PNG’s citizens will reach completion as well has yet to be fully realized and seen.