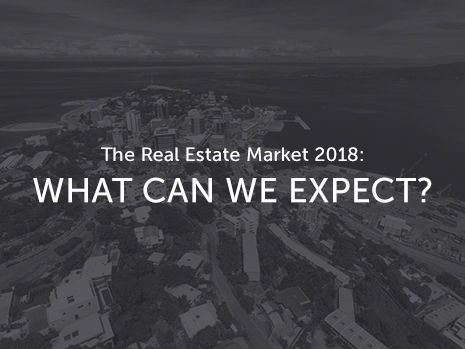 The Real Estate Market 2018: What Can We Expect?

The real estate market in PNG is largely determined by the laws of supply and demand and thus makes it increasingly difficult to forecast. Hausples recently had the opportunity to speak to some of the best in the business on what to expect in 2018.

Q. HOW DO YOU SEE THE MARKET PERFORMING GENERALLY IN 2018?

“I see the real estate growing slowly and moving in the right direction in 2018. Both for house sales and rental.”

HOW DO YOU SEE THE EXPAT MARKET? WILL PRICES GO UP OR DOWN?

“Broadly down. Surprisingly, most of our high-end properties, those over the K4,500 mark are nearly full, so there's obviously still demand at the higher end but prices are down from what they were a few years ago. I think you can say the general expat rental market is seeing rentals fall.

Employers are seeking to save costs and reducing rental allowances is an obvious area, this then leads to further downward pressure on prices.”

If landlords have a property that doesn't have a differentiation in terms of good sea views, facilities or size, older apartments in need of work are the ones that are really going to be struggling to maintain a reasonable rental return, whereas newer ones are probably going to be a little more in demand.”

“Definitely down - there's no two ways about it. As you know there's a comeback in some cases by more than 2%. It depends on what happens on the resource side where the expat market is generally reflective of any major forthcoming developments. Again, the consolidation stage that we are in has taken the initial downturn. It is on a slower trajectory now than it has been, so I don’t see a lot more expats coming into town but after APEC, who knows? There's going to be a lot more interest in the country so we're hopeful that that might stimulate demand for more of the expat type houses.”

“The rents have definitely come down, especially in the high-end market and I think they may continue to decline because there's not enough tenants out there.”

“Towards the end of this year, as numbers of expats come into the country in preparation for some major construction projects and the APEC summit, it is likely that the rental market will increase. This happened in the last property boom in POM and since then there has not been a great deal of additional housing constructed for the market.”

HOW DO YOU SEE THE AFFORDABLE MARKET PERFORMING? WILL PRICES RISE AND DO YOU SEE DEMAND INCREASING?

“From an affordable housing point of view, once some of the issues around land availability are resolved, I would think that at the lower end of the market there's room for prices to come down. But I think that's dependent on developers using new building techniques and building more PNG appropriate housing. Some of these new estates, where they are building row upon row of stilted houses, in the long term, they're not going to appeal to Papua New Guineans. New estates need to be a little bit more 'village focused' and feature more open spaces and communal areas.  I think that there needs to be different thinking about what affordable housing actually is, and not just creating these huge estates.”

“It's pretty exciting that its now centre stage and there's a lot more thought being given to that and, as you know, building a high-rise tower is probably the best option at the moment to accommodate affordability. The traditional style housing is one that is favoured by most Papua New Guineans so it's going to take a while to convince people that perhaps they should be looking at vertical housing rather than horizontal. They are more affordable. Say if you’ve got a foot-print of a thousand square meters and generally that’s one or two houses there, but on 1000 square meters you can put a 15-storey tower that could accommodate 80 or more families. I think it’s just a slow, educational process because the market is still maturing to get out in the field and say, ‘Traditional houses are going to cost you anywhere between K500,000 to K1 mil whereas you can get an apartment for an odd K400,000.”

“There's a big demand for affordable housing but I think there's still a lack of supply. There's a big market for anything between K320,000 to K350,000. I just don't think we have sufficient products for a lot of Papua New Guineans within that price bracket and it could be a case of whether there's sufficient land available.

“We know the demand is there, doing the Hausples Show last year proved that. We, at Rhodes, have an affordable quality product and we hear that all the time. The issues people face here are obtaining land to build and banks approving loans. However, both the banks and the Government have realised this and have started to act.”

WHAT DO YOU BELIEVE WILL HAPPEN WHEN WE HEAD INTO 2019?

“It’s really difficult to make a generalization across the real estate market. There will still be reasonable demand by people purchasing a home to live in and as a general rule, established residential areas like Boroko and Korobosea have seen prices remain reasonably firm. Broadly across the rental market, I anticipate 2019 being a tough year. To a certain extent, in 2018, the market is being propped up by expenditure on preparing for APEC and the subsequent flow into the economy.

Once the committed expenditure for delivering APEC has gone, the government is likely to tighten up and that's going to leave a big hole in terms of the monetary injection into the Port Moresby economy. I think that will flow on very, very quickly through the market and lead to a further downturn in demand and put downward pressure on rentals. I’m reasonably confident we will get through 2018 and have a fairly good year, however I'm not seeing anything that's giving me any confidence in the short term. Over the medium term I can see it starting to bounce back. I think 2019 is going be a tough year.”

“It's very interesting, I think we'll get a spike around APEC obviously for activity around housing and accommodation and projecting forward to 2019, again I think we're very dependent on the resource sector and major developments coming to town to bring an influx of people in. The demand may pick up in 2019, as I said originally, I think the consolidation phase has started, there will still be some downward trajectory on pricing and that's a good thing for the general public because the housing is extremely expensive so I see that as being a positive note for people that are looking for housing. On the same token its very short sighted to go for something that's cheap because quality is a big concern here.”

“Standards of houses should improve. People are becoming better educated about housing and materials used in building them. They are asking questions all the time. Builders and suppliers will have to raise their game if they want to stay in the industry.”

“We've still got sellers expecting that they're going to get prices they may have gotten three or four years ago. They are basing the value of property on the rents that they might have been getting at the height of the market. There are quite a few active purchasers in the market at the moment, however the vendor's pricing expectations far exceed what buyers are prepared to pay.”

“There seems to be no entry level or barrier for anybody to act as an agent. When you're dealing with somebody's biggest asset in their lifetime, I think there should be checks and balances on who can actually practise in that sector. There are a lot of sales agents out there who are really uneducated in terms on the protocols that need to be in place, so it's a big issue. At some stage I think it will be addressed and I hope to be part of that.”

“For the people who are cashed out, you might be able to pick up properties where people are forced to sell.

There's a big need for more affordable housing and it's something the Government really needs to address.”

“An increase in the rental market will have a knock-on effect. Companies have to look elsewhere to accommodate staff. For example, we have just completed a project at Koki for Nambawan Super for their staff housing, and we can see more of these types of projects happening. Keeping staff happy with quality housing keeps them happy at the company that provides it.”