Sites and Attractions of PNG

Papua New Guinea is one of the the most culturally diverse countries in the world and is also one of the most rural with only an estimated 18% living in urban areas. The country has approximately 852 known languages and has a population of over 8 million people.

Being one of the least explored countries in the world, PNG has a lot on offer. While the list is long, this article will look at some of the main attractions as well as the best places to live in.

Papua New Guinea is known as the land of the unexpected or surprises and as one of the least explored places, it has a lot on offer in terms of attractions.

The Bird of Paradise is one of the main attractions of PNG and features on the national flag.  This member of the Paradisaeidae family habitats Eastern Australia and New Guinea and is best known for the elaborate mating ritual, where the male displays its plummage in a fascinating unique method.

The country is famous for its bird watching as it is home to a thriving bird population due to specific habitats and climates favored by the endemic species and the lack of predatory animals. Birdwatching is available through out the country from he coastal and island locations to the rugged peaks of the highlands. PNG is famous for endemic species such as the Raggiana and the Blue Bird of Paradise including the fire maned Bowerbird.

Other attractions include the various mountain peaks such as the Mount Wilhelm which is 4, 509 metres or the country’s 2nd highest peak which is Mount Giluwe which is 4, 367 metres in height. The Tavurvur which is a active stratovolcano near Rabaul on the island of New Britain.

Another famous drawcard is the Kokoda Track which is trek of 96 kilometres inland through Owen Stanley Range, made famous as a major battle ground between Allied and Japanese forces during World War Two, or the Black Cat Track which is a rough overland track in the Morobe Province and runs from the village of Salamaua to the mountains then to the township of Wau.

The following is an overview of popular residential localities within PNG, including security of the area, local amenities such as shopping, essential services, social hubs, proximity to business centres and tourist attractions.

Boroko offers quick access to many sporting and recreational facilities, such as the National Football Stadium, the Rita Flynn Netball Centre and Bisini Parade Grounds, all of which are all located along the same road and are an easy five to ten minute walk of each other. Many national and international events are hosted along this stretch of road.

From Boroko you have easy access to other suburbs, one of Pom City’s main public bus stops is here, so getting to and from work or school is easier. Boroko offers a police station, a fire station, a post office, banks, a craft market, many grocery stores; service stations; pharmacies and other health services; beauty parlours; schools and an assortment of churches. It is regarded as Port Moresby's central commercial and shopping hub. 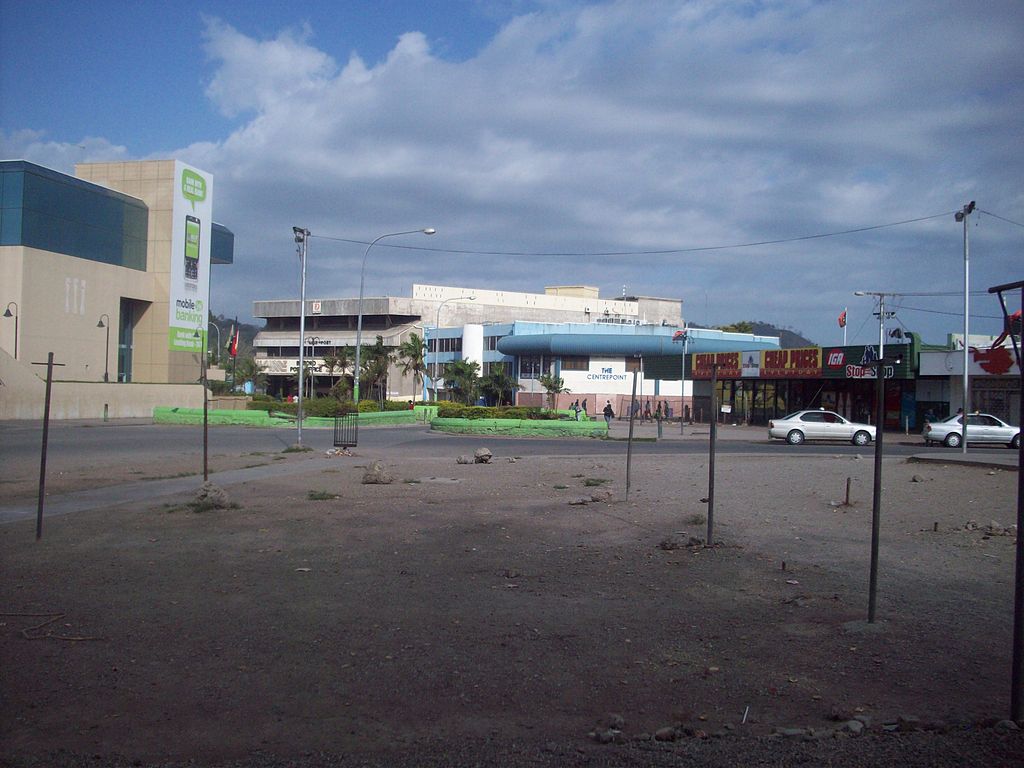 Witness the nation's monumental events at Waigani. Not only is it one of the largest suburbs in the country but Waigani also has the most national and cultural attractions in it. The National Parliament, the National Museum, the Prime Minister's official residence, the Port Moresby National Arts Theatre, the National Library, National Archives, the PNG National Court, Morauta Haus (office of the Prime Minister of PNG) and the city’s only golf course - the Royal Port Moresby Golf Course are all within a five minute drive of each other, essentially sharing fences with each other.

Waigani also hosts Vision City, Port Moresby's largest shopping mall and home to fashion outlets, restaurants and the food court and a wide range of both local shops and international franchises.  It has PNG's main cinema on the top floor as well as a popular nightclub, and connects to Stan;ey Hotel.

Opposite Vision City is the Sir John Guise Stadium, the main venue of international sporting events.  The stadium is also home to the annual Real Estate Show, hosted by Hausples.

Waigani is as versatile a neighbourhood as they come. It has a wide range of educational facilities from private, to church run to public institutions, there is daycare to tertiary institutions that offer an array of skills and subjects. There is entertainment for the artistic, for the athlete, there’s entertainment for the computer and gaming nerds, movies, restaurants, bars, nightclubs and pubs, motor cross clubs - if there is one suburb that truly has it all, it is definitely Waigani.

The Gordons suburb is the industrial hub of the capital city. It has the most businesses and warehouses but it also features a vast residential area with many standalone houses. Gordons is the closest to Jackson’s International Airport out of the four suburbs featured. Boroko Foodworld and RH, two of the largest shopping outlets, are located within Gordons. For many expatriates this suburb is attractive because of its ease of its location in the city - easy to get to offices in good time and if you want a weekend escape outside of town to explore the rugged mountains or the white sandy beaches of Central Province then this is an ideal location to search.

Downtown Port Moresby or simply ‘Town’ is the most expat preferred suburb because of its captivating view of the sea overlooking both Fairfax Harbour and Walter Bay and the proximity to the city's Central Business District. Prime social clubs (Yacht Club and the Aviat Club) are all within a 10 minute driving radius. Major hotels feature in Town, including Crowne Plaza, Grand Papua and Ela Beach Hotel, all of which offer high quality accommodation and excellent cuisine.

The area hosts a number of iconic buildings, such as Kina Haus (formerly Deloittes Tower) which was PNG's tallest building one point.  New developments are now dwarfing Kina Haus, such as the Old Parliament Haus Towers and China Railway building, both of which will boast commercial, residential and shopping facilities.

Downtown is also home to the newly developed Ela Beach which is open to the public and features basketball courts, parking and general entertainment and is next to APEC Haus which was completed just this year specifically for the Asia Pacific Economic Cooperation, hosted in Port Moresby for the first time.  Beyond APEC Haus is the new Paga Hill Ring Road which is a beautiful walk or drive around the spit with stunning sea views.  This takes you to the Harbourside complex, home to commercial office space, seafood restaurants and a buzzing nightlife.

Morobe Province is located on the North Eastern part of Papua New Guinea. Morobe has one of the most versatile environments in PNG with beautiful white sandy beaches, savannah plains, swamps, low land rainforest to rugged mountain peaks. There are over 101 languages spoken here. The Province is considered the link to highlands and islands.

Lae City is the capital of Morobe province, the second largest city in the country, and is the commercial and industrial hub of the country. Morobe province has a massive land area that is yet to be developed and many developers are taking advantage of this by building large industrial type structures and residential properties to accommodate those that will work in those properties. Particularly after the 6 mile suburb onwards there is rapid infrastructure growth. You can travel by road from Lae to Madang or to all the Highlands provinces.

Madang Province is located on the Northern coast of PNG. It is one of the most popular tourist destinations in PNG with its rugged mountains, dense virgin forest and pristine beaches, in fact it is the most popular dive destination in PNG. Madang is also a popular historical and anthropological area due to it having 173 of PNG’s languages; and World War II left behind a legacy of 34 sunken ship that offer dive sites to explore at Hansa Bay, near Bogia.

The colourful Madang Township has been called the "prettiest town in the South Pacific" (Papua New Guinea Travel, 2018). Madang town has modern urban facilities, including hotels, department stores, bustling markets and historical artefact shops and displays in the Cultural Centre. Madang is also a key destination for meetings and conferences.

Like Port Moresby, Madang has seen much infrastructural changes in the last 5 years as a result of the rapid growth of mining and tourism industry. There are many new residential type properties in Madang town and the same is occuring in areas outside of Madang town. The highway from Madang continues to either the Morobe province or you can venture up to the Highlands Region.

Mt Hagen is the capital city of Western Highlands province but is also the hub of the Highlands Region with it being the main stopover for road travellers intending to take the Okuk Highway to Wabag, Southern Highlands and Hela Provinces. Hagen is a bustling commercial centre where wealth from coffee and tea plantations had fuelled the initial development of the town, now however the mining industry has spurred the growth of the real estate industry in this province.

Western Highlands Province also has a robust tourism industry with majestic mountains and beautiful flora and fauna, this province is known for its beautiful art and craft and it is referred to as the wild frontier of the Highlands region.

Kagamuga International Airport being the hub of the highlands airway daily sees flights in and out from private operators that bring in personnel to and from mine sites in the Southern Highlands, Enga Province and Hela Province.

Rabaul used to be the major town in East New Britain Province until the disastrous eruptions of Mt Tavurvur and Vulcan in September of 1994. This event signified the moving of all major services to Kokopo town. Tokua Airport is the main airport in East New Britain with plans to upgrade to an international airport in 2019.

East New Britain is a major tourist hub in PNG with its riveting World War II history. There are Japanese cave systems, barge tunnels, aircraft wrecks and submarines, volcano climbing, scuba diving, snorkeling and trekking. It a perfect tourism investment location especially considering that the government has chosen this province to invest in for tourism development under its Tourism Master Plan.

West New Britain sits on the south western part of the island of New Britain. Kime is the provincial headquarters of West Britain Province. The largest income from this province is from exporting oil and it is covered with many oil palm plantations (especially in Kimbe) and there is also some logging in the interior and on the south coast.

Tourism is also fast becoming a profitable industry in this province with Walindi Plantation Dive Resort attracting divers globally, there are also beautiful fishing and snorkeling spots on offer in this area. The Muruk cave system in the Nakanai area of West New Britain is believed to be the deepest recorded in the southern hemisphere.