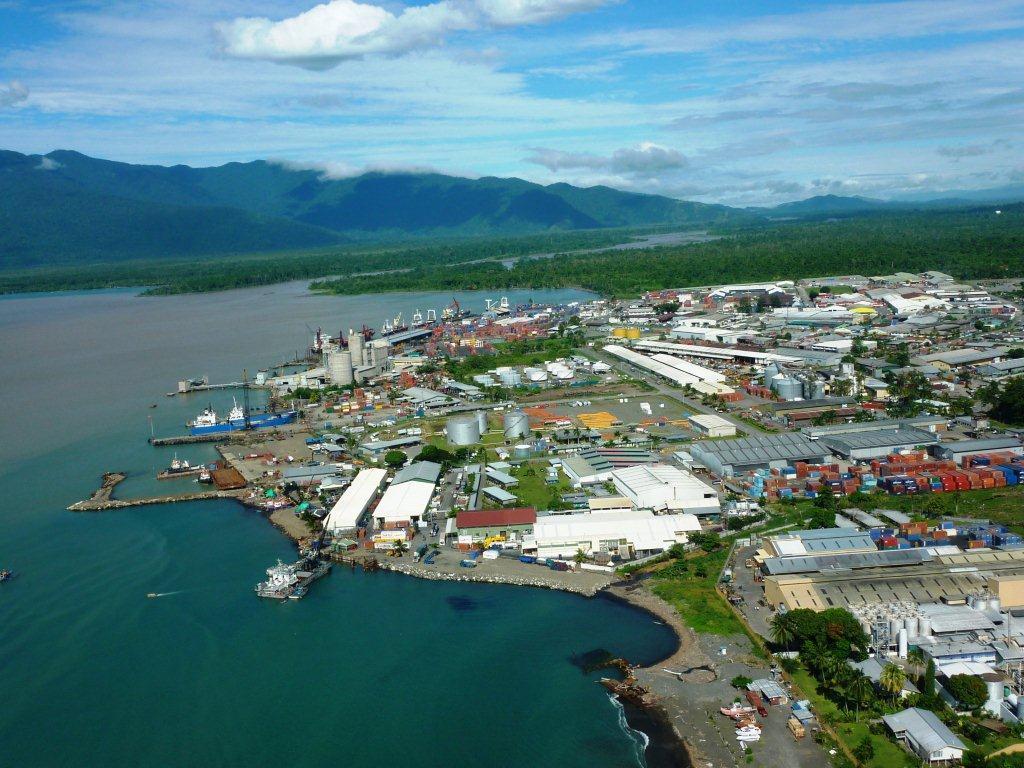 Lae is the capital of Morobe Province, and the second largest city in Papua New Guinea.

It is situated on the northern coast of the Huon Gulf Peninsula, within close proximity to the Markham Delta. The city is considered as the industrial axis of Papua New Guinea, because it has more industrial capacity than both Port Moresby and Mount Hagen combined. The city of Lae retains an impressive internal road network, serving the logistics needs of both Madang Province and the Highlands Highway, which significantly stretches up to 700km.

The official population of Lae City, based on data compiled by the PNG National Statistical Office, continues past 148,934 to date, which is inclusive of its 11 suburbs: Bumayong, Bugandi, Chinatown, Dowsett, Eriku, Malahang, Taraka, Tent City, Voco Point, 3 Mile and 6 Mile.

The traditional custodians of the greater Lae area are the Butibam and Kamkumung villages, who happen to be the first inhabitants of the land that is currently Lae city. However, the battle for land ownership between the two villages has been ongoing since the colonial days.

Lae was built on the back of the Wau-Bulolo gold rush, with prospectors and miners using Lae airstrip as the transport hub to fly equipment to the fields, during the 1920s. The town grew as miners flew in from around the world with the Morobe Goldfield, at one point,  hosting 700 expatriates and over 6000 local miners.

Overtime, Lae city developed into both a major cargo port and manufacturing base in PNG, with almost 20 foreign and locally-owned companies operating alongside each other.

In the years that followed, more established routes were developed and penetrated throughout much of Lae, allowing stories and histories to be told and retold as the city matured. It was not until 2014 when a mammoth plan for development was forecasted by the Asian Development Bank for the Lae wharf, named as the ‘Lae Port Development Project’, which amounted to a hefty sum of $390 million.

Upon project completion, the wharf had an additional 250 meters spread on top of an  existing base of 600 meters, purported to ease shipping congestion.

Being the industrial axis of Papua New Guinea, Lae became an important point of entry to the Highlands region, resulting in a revitalised economy that stemmed from major sectors such as distribution, manufacturing, fisheries, mining and agriculture gaining strength.

Lae was established as a township in 1900 when German traders set up a branch of what was then known as the New Guinea Company in Lae. German missionaries arrived in numbers between 1915 and 1919 at the Territory of New Guinea, which was administered by the Germans and was later handed over to Australia, following the defeat of Germany in World War I.

Missionaries from the Lutheran Church later settled in Lae and have had a profound effect on the lives of Lae residents and the province’s population since. The town eventually came under the Australian colonial administration following World War I. However, not much of a development was seen other than a police station and an administration center, until the Wau-Bulolo gold rush in 1926.

In 1941, the Australian government chose Lae as the new capital of the Territory of New Guinea following the 1937 volcanic eruption in Rabaul. But the status-change wasn’t effective immediately, as the region came under fire from World War II, largely due to the invading Japanese Imperial Forces, who went on to occupy the township together with Salamaua; both areas were then turned into major Japanese bases on the island of New Guinea. Following defeats at Kokoda Track, Guna and Wau, the Japanese retreated to Lae and Salamaua, where they made a last stand that saw weeks of fierce fighting, before succumbing to defeat in September 1943.

The Australian colonial administration founded Lae’s local government in 1971, followed by the proclamation of Lae as a city in 1972. Between 1978 and ‘79 – backing the establishment of the Morobe provincial government – the Lae City Interim Authority was created under the Development Authority Act 1981. The city authority became the Lae Urban Local-Level Government Council in 1997, as a patronage to the National Government’s provincial and local-level government reforms.

Lae’s economy relies heavily on the distribution, manufacturing, fisheries, mining and agriculture sectors, thanks to its strategic location as the gateway to the Highlands region, as well as its establishment on the northern coast of PNG, which links up with other provinces in the Mamose and New Guinea Islands regions.

The completion of the ADB-funded project was ensured through an investment by the then National Government, that was worth K250 million. The project was aimed at rehabilitating Lae’s major roads between 2013 and 2016, alongside the construction of a four-lane highway, to link both Lae and Nadzab and succinctly resuscitate the city’s private sector.

The redevelopment of the Nadzab airport in 2018, came in at a whopping K600 million, a project funded by the Japanese government at that time. The scope of the project was to allow for an increase in air traffic to Lae and Morobe Province following its commissioning.

Having already benefited from the construction phase of the $19 billion ExxonMobil-led PNG LNG project, as the city had produced and transported thousands of tons of goods to service the project site in the Highlands, putting Lae in the box seat to capitalize on the extractive industry.

The Wafi-Golpu gold and copper project, situated approximately 65km south-west of Lae, was the brainchild of Newcrest Mining Limited, who  came off a K12.7 billion investment.

Lae’s Nadzab Airport is a 30-40 minute drive from the city, and is the key link by air between Morobe province and other major centers throughout PNG.

On land, the National Government is responsible for maintaining a 137km stretch of road, comprising Independence Drive, Markham Road, and the Milford Haven Road. The other remaining portions are the sole responsibility of Lae City Council.

The National Government, that time, invested K250 million between 2013 and 2016 to restore the city’s road infrastructure, which saw most of them resealed.

In addition, a four-lane highway was constructed to ease the traffic congestion that occurs between Lae and the Nadzab Airport.

Work began that year (2018) to redevelop and upgrade the Nadzab airport, which was planned to receive international flights, presumably overseen by the Japanese government, back then.

Things To Do in Lae

Currently, Lae is experiencing a surge in department and hardware stores, banks, travel agencies and a plethora of small shops and business owners. The major players in this regard include the likes of Papindo Lae Toptown Shopping Centre, Papindo Supermarket, Lae Plaza, and Brian Bell Plaza.

Price Trends for Properties for Sale in Lae

Price Trends for Properties for Rent in Lae