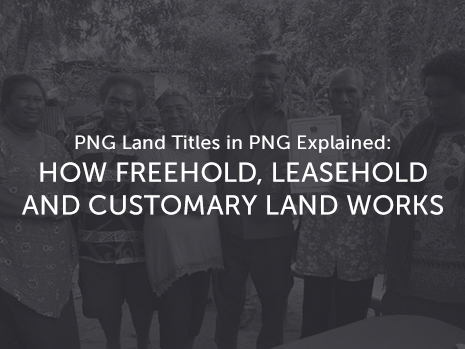 The nature of land ownership is almost generic in many countries around the world; that is land held under freehold and leasehold. In Papua New Guinea’s case, a form of land ownership will come under either one of these two forms as well as customary land ownership. Our strong traditional connection to the land, calls for us to understand these forms of land ownership; in particular the rights, regulations and possibilities associated with them.

Taking a two hundred-year-or-so step back in our history, the traditional land owners in this country had their own mechanisms in place to deal with the issue of land ownership. These processes were aimed at mediating peace and finding a compromise between warring tribes – this same spirit we see now entrenched in our land mediation processes.

The period of time which followed saw the arrival of the British Colonisers in Papua who brought along their system of land ownership used today – freehold and leaseholds, whilst recognizing traditional forms of ownership in the land by the native population. The land acquired by the colonizers were used for a variety of purposes, most commonly large plantations apparent in the New Guinea Islands.

The years leading up to Independence saw the first real indication of how Papua New Guineans wanted their land to be regulated when the Commission of Inquiry into Land Matters Report 1973 suggested that upon independence, all land acquired by foreigners be given back to the traditional land owners, in particular those heavily affected by the issue of land shortages at the time. Those who kept their land at the time of Independence were required by law to have significant development made within 5 years or bear the risk of losing the land.

Fast forward to 1996 and the passing of Land Act and its accompanying legislations saw the recognition of and processes to deal with land ownership; through the adopted leasehold and freeholds as well as customary land ownership.

What is the Difference Between Freehold and Leasehold Titles?

The most significant differences are the ownership of the land and the processes to acquire them.

Leasehold titles involve a person who owns the land, but gives it to another whom will have ownership over property on the land for a period of time. In PNG, the most common form of leasehold dealing is through a State Lease lasting a maximum of 99 years. Much of ‘alienated’ land belongs to the State. As noted by by the Jones Lang Lasalle: Property Investment Guide 2014,  “97% of land in PNG is held under customary ownership for which there is no recorded title… All other land is alienated land held by the State” These statistics being from a few years ago, the percentage is likely to have increased, thus State Leases will be used as the primary example in understanding leaseholds.

Another feature of leasehold titles is that once it has been registered and certified, the validity of the ownership cannot be challenged or defeated.  This feature was adopted when PNG adopted the Torrens Title System of Registration from Australia.

In order to acquire a new State Lease administered by the Department of Lands and Physical Planning, the process begins with an allocation of vacant land in accordance with the plans made; that is whether a place is to be sold for residential, commercial or industrial purposes. When the allocation has been done, vacant land gets published in the National Gazette under the heading ‘Land Available for Leasing’. Individuals and companies may then apply for the lease of this land from the State.

A lease may be applied for a period not exceeding 99 years and at its expiration the State is allowed, but not obliged to, renew the lease. Applications for State Leases are made to the Land Board which considers them and based on their merit, submits to the Minister for his decision. The Minister has the final say in granting or rejecting an application for a State Lease. In an instance where a lease is granted, the application will be published in the National Gazette under the heading ‘Successful Applicant.’

Freehold titles indicate that the name of the person or business group on the Certificate of Title (COT) owns both the property and the land upon which it stands. Land which can be converted to freehold is originally customary land and cannot be State Land.

Freehold land registration is not as commonly advocated for as the Incorporated Land Groups (ILG’s). ILG’s in comparison to freehold, involve a large number of groups or clans that have come together to register their members and respective customary land under one group. An ILG can then lease this land to businesses (most common mining companies) who operate on their land, in return paying royalties to the members of the ILG.

Mr Batata outlined the process for registering a freehold title saying that “Under the Land (Ownership of Freeholds) Act, an application under Section 7 may be made to the Land Title’s Commission accompanied by survey plans of the proposed land. After deliberation, an issued Conversion Order will be given to the Registrar of Title’s (ROT) and they will issue a Certificate of Title.”

Making up the majority of land in PNG, it is important to take note of customary land which is also termed “unregistered land” because it doesn’t need a certificate to prove its validity. Given the country’s unique legal system which recognizes both customary and common (English) law land rights, the issue of customary land ownership and the specifics of boundaries are determined through the traditional mediation processes used by customary land owners.

The option to deal with disputes in the Courts is also available which can be taken up in the Local Land Courts and Provincial Land Courts. 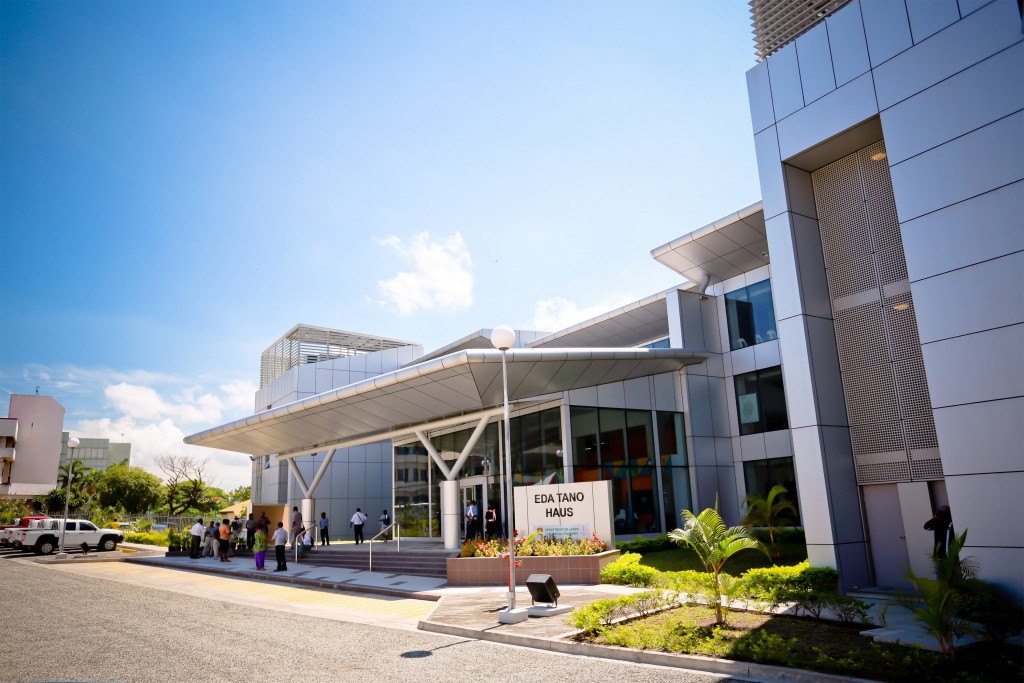 What are the Advantages and Disadvantages of Leasehold, Freehold and Customary Land?

The advantages and disadvantages for each of these title ownerships are determined by the ‘restrictions’ which are tied to the title.

State Leases contain one particular restriction, which is the approved purpose specified in the lease of that land. For instance, a car workshop cannot construct their place of business when their title has been leased for the purposes of residential use. This ensures the Physical Planning conditions specified by the Department of Lands and Physical Planning are complied with.

All freeholds titles have “Restrictions” detailed on the back of the Certificate of Title at the time of registration. These restrictions have been specified under Section 26 of the Land (Tenure Conversion) Act prohibiting the title holder from:

Mr Batata, used the example of using a title as security for a loan and explained that there is a way around these regulations to allow flexibility when using the title. This process is provided for under Section 26A of the Land (Tenure Conversion) Act under which an individual can apply to the Minister to remove the restrictions on the title. The Minister refers such applications to the Land Titles Commission to conduct investigations on the title and ensure that all parties that have legal interest to the title are satisfied, after which the restrictions may be removed.

Customary land has the potential to be utilized to benefit many people if handled properly. One way is to register land under as an Incorporated Land Groups (ILG). This, among other things, identified all of the people with an interest in the land. This land can then be leased to businesses to conduct operations on the land and the customary land owners may in return receive royalty payments.

Read more about The Benefits of Incorporated Land Owner Groups in PNG . 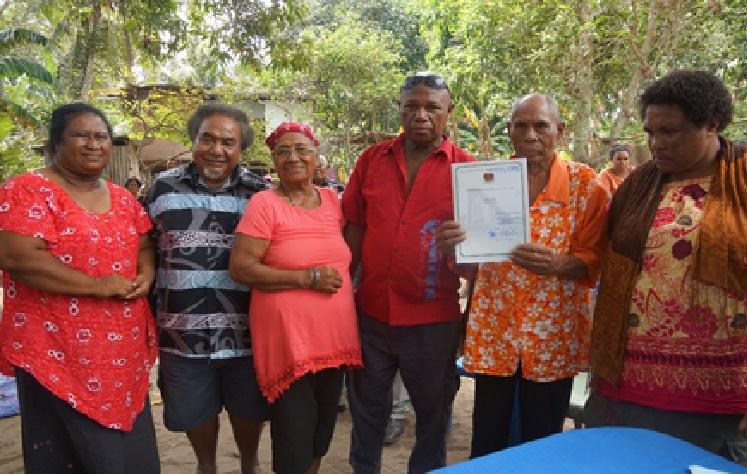 Pictured are members of the registered ILG consisting of the Rokolo Clan in Irupara Village, Central Province. Photo source: Department of Lands and Physical Planning

Other Views on Leaseholds and Freeholds – Restrictions on Borrowing

Various businesses have their own view on how to deal with leaseholds and freeholds for the purpose of their operations. An example given by Mr Batata (and confirmed by a Bank employee that wished to remain anonymous), was that banks do not generally recognize Freehold titles of property when considering loan applications. Despite there being a process available to remove the restrictions on Freehold titles, the banks would be more likely to entertain a Leasehold title of property as valid security for loans.

How to Conduct a Papua New Guinea Title Search

Mr Sampson of the National Lands Commission of the outlined the following process to conduct a title search:

1. Anybody can conduct a title search at the ROT Office by:

3. Copies of documents are provided to the person conducting the search (if requested), including copy of the original title. The original copy will state the:

4. Officer will provide a bill/invoice to be paid at the counter before providing an receipt. The fee for conducting a title search K100 for each titles searched plus photocopying fees.

For more information regarding the Freehold and Leasehold Titles as well as Customary Land Ownership, the Offices below can be contacted on the following:

Department of Lands and Physical Planning